Given my interest in ballot questions in Maine history, I’ve set out to collect as much polling data as possible on these questions.  Many poll results are posted to Ballotpedia and Wikipedia–aggregated from news coverage of the polls in recent election years–but I’ve also been fortunate to collect additional polls from my colleague, Chris Potholm, who was a Maine pollster for many years.   These results are not comprehensive of all polls on ballot questions in the state, and I’m continuing to collect data.  But I have enough data at the moment to look at some trends.

Consider the below graph first, which examines the percentage of survey respondents in the 100+ polls who were undecided at the time.  The x-axis shows the number of days to the election at the time the survey was in the field.   Predictably, as the election approaches, undecideds sort into “favor” or “oppose” camps.  Still, bonds have plenty of undecided voters even 20-60 days out from the election.  And despite the fitted trend moving downward in the last 100 days or so, the data itself still show a wide range of undecided opinions. 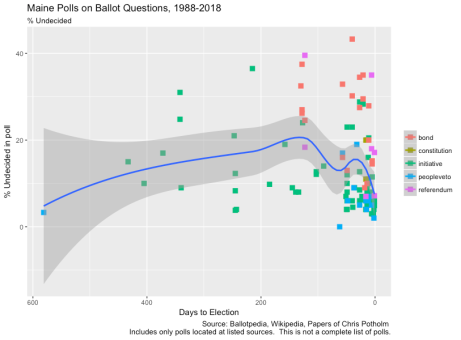 Next, look at the results of the poll relative to the final outcome.  Here, I show the percent who favor the ballot question (calculated to exclude undecideds; % favor divided by the total percent either in favor or opposed) minus the final percent voting yes.  I also fit the trend for the two most numerous ballot questions, bonds and citizen initiatives.

Interestingly, polling on initiatives tends to consistently over-estimate the favor position. This “favor” bias narrows as the election gets closer.  Bond questions also tend to over-estimate the “favor” position, but the trend ends up near a zero bias on election day only because a handful of polls under-estistimate the final tally. 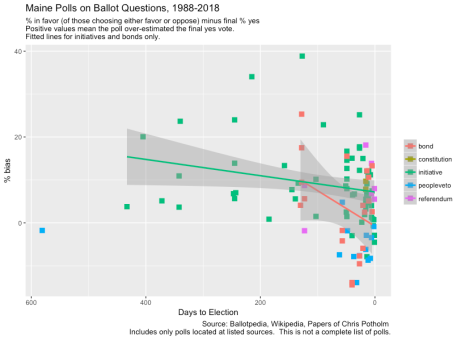 All told, polling on ballot questions is notoriously tough.  Question wording likely matters a great deal, unlike the more tame head-to-head polling in candidate elections.  And polling Maine voters is increasingly a challenge, as it is everywhere, with plummeting response rates and the prevalence of cell phones (often with out-of-state numbers for recent movers).