The presidential primaries are underway, and as I write voters are casting ballots in the “mini” Super Tuesday states.  I’ve long been interested in the pace of these nomination campaigns.  Below is a graph of the cumulative delegate counts awarded over the course of the primary/caucus schedule; I show this for Democrats in five cycles where there was a decently competitive campaign.  To be sure, the “allocation” of delegates only partially happens on the day of the election or caucus.  A lot more formally happens in county and state conventions after the election.  But in practical terms, this graph shows the degree of frontloading: the tendency for primaries and caucuses to be early in the calendar year.

2020 looks a fair bit like 2000 and 2016, with a lot of delegates at stake in early March.  2020 is a bit more face-paced than the other campaigns after that, though, with hundreds more delegates awarded by the end of April (April 28 has 6 contests, including Pennsylvania and New York) than in the other two years.

But 2020 is certainly not like 2008, when “mega” Super Tuesday happened in early February, and not much at all happened between the very beginning of March and the middle of April.  Indeed, two-thirds of delegates (excluding superdelegates) were on offer by February 12.  This year, by that date only 65 of nearly 4,000 delegates had been determined.   Still, we are a long long way from the drip-drip campaign of 1976, which had 27 dates with a caucus or primary, and no comparable Super Tuesday.  The closest we got was May 25, 1976, when 6 states voted.  This year, we have only 20 election dates, and 22 states/territories held their primary/caucus on either March 3 or March 10. 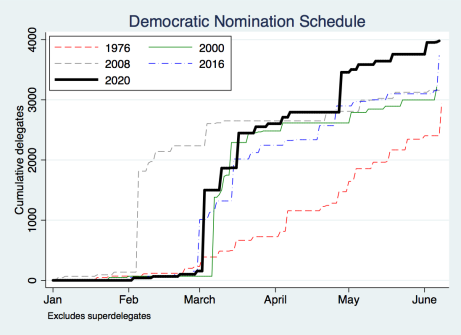