I love counting things, and my latest interest is the number of steps-per-day that I walk.  You often hear the claim that 10,000 steps is a good goal. For a number of years, I used my iPhone as a pedometer, but I know also that this is not a great option since I don’t carry my phone with me at all times.  In July of 2018 I got a Fitbit as a Father’s Day gift (thanks kids!).  Enter some counting fun!  For the period covering July 2018 to June 2019, I have both the iPhone and Fitbit as measures of my steps-per-day.     This sets up two measurement opportunities.

First, I can quantify the systematic measurement error in using my iPhone as a pedometer.  That is, I can show how much it under-counts my steps.  Check out the figure below. 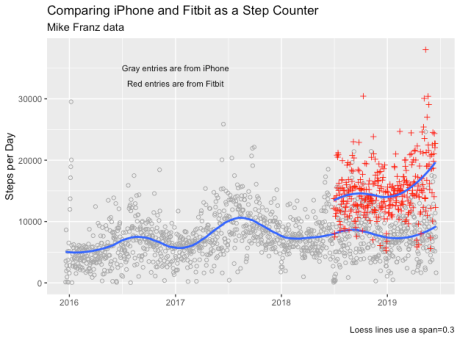 As should be clear, the iPhone definitely undercounts my walking–and by a lot.  The mean number of steps that my iPhone counted per day over a 3 and a half year period was 7,480.  The mean number from my Fitbit was 15,127.  So my phone is undercounting by nearly 8,000 steps a day.  That makes my phone a pretty bad measuring tool of my physical movement.  Of course, I didn’t buy my phone principally to use as a pedometer, and it might be heartening to know that I am not carrying it with me for all of my waking hours.

This sets up a second opportunity to make some inferences.  Despite the point above, I still often asserted the pedometer function as an excuse of why I was carrying my phone around the house, while mowing the lawn, or going for a quick walk or run.  That is, I used that reason as a justification to have it in my pocket.  (No, I would never think of also checking my email when I was at a cross-walk!  Shame on you for even thinking that!)  If I was being true to that claim, though, I should have started carrying my phone less after I got the Fitbit.  After all, why carry it if I don’t need it quantify my movement?  The overlap in the time series allows for an analysis of such a claim.

At first glance, one could argue that I was being disingenuous about reasons for carrying my phone.  The trend-line for the iPhone seems pretty stable, and it doesn’t nosedive after I got the Fitbit.  Still, this is masking a few things.  For one, the mean steps-per-day for my phone is different before and after I got the Fitbit.  Before=7,323 +/- 242.  After=7893 +/-403.  (The +/- allow for 95 percent confidence intervals around the means.) In statistical terms, these two means are not different, but I might argue that since I have the universe of steps-per-day, I don’t need confidence intervals (which are most appropriate when you have only a sample of data).  The mean difference shows a 570 step increase, which is a 7.7 percent relative bump in steps after I got my Fitbit.  So getting the new device meant I carried my phone nearly 8 percent more.

On the other hand, my Fitbit shows a pretty steep increase in my steps-per-day over 2019.  As of early summer 2019, I was averaging nearly 20,000 steps per day.   More precisely, I recorded 12.8 percent more steps per day in 2019 than in (the second half of) 2018.  My iPhone was not recording a similarly stark increase.  Indeed, in the same time period (July 2018 to June 2019), my iPhone shows a 3 percent drop in steps-per-day comparing 2018 (mean=8015) with 2019 (mean=7760).  So, in effect, as my Fitbit recorded more movement every day, my phone did not, which must mean it was sitting on the counter somewhere.  That’s pretty good evidence for my initial claim that I carried it around so as to quantify my physical activity (and not to have instant email and news notifications).  Still, let’s be honest…I use my phone principally for those reasons.  We all knew that anyway, right?

All told, this was a fun exercise (pun!).

One thought on “Counting Steps”